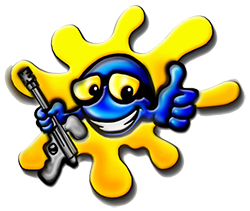 The geography, obstacles, and structure of each of our competitive battefield zones, as well as the course's strategic goal, are all unique.

Skirmish Samford Battlefields outdoor grounds are popular venue for participants, being only 35 minutes from Brisbane’s CBD.

Players will be relax in the green zone.
With ample shaded seating for the largest of groups, wet weather areas and plenty of picnic tables and bench seating under shade sails.
You can relax in the shade have a cool drink and tell tall stories!

The Lost Valley is a great natural bush field full of hidden gullies with 5 bridges spanning them. Players will find themselves battling on scrubby slopes with heaps of natural cover attempting to conquer the 2 Fortified Outposts. With multiple objectives throughout the field, the action surges hard and fast across this awesome map. Time to outwit, outsmart and outplay the opposition to win

The Speedball field at Skirmish Samford  has multi-roomed buildings making more a game  of of maneuvering and teamwork.
It’s a hardcore balls to the wall action game with stealth taking a back seat.
The objective of speedball is for teams to gain control of the 3 goal posts spread out across the field’s open half way line.
Speedball is  played at the end of the session and great way for players to squeeze in a series of short fast paced games.

The iconic Fortress, the only one of its sort in Brisbane, dominates the Skirmish Samford battlefield.
A large purpose-built building that consistently lives up to its illustrious reputation.
The pictures do not do it justice!

The Fortress is a professionally constructeds three level combat platform building designed exclusively for skirmishing activity.
I consist of six large towers with ramps leading to various battle levels.
The lofty walls and commanding towers of the Fortress are connected by gangways that defend the entryway, completing the defences.
The Fortress is totally surrounded by a system of outer bunkers and trenches, making it a difficult nut to crack.

The stronghold also contains a complex system of exterior defences, trenches, pill boxes, and bunkers to test troops.
Skirmishes never get tired of the action and thrill of the Fort Fight since the games that may be played

It’s balls to the walls action on the Bridge Assault map, you won’t believe your eyes. You’ll have so much fun that you’ll need a steel brush to get the smile off your face.

Tough strategic choices await on the Bridges Assault field. Do you attempt to push through the heavily defended Dam wall or charge up around the dam to secure the bridges? Ignore one and surely the opposition will capitalise on the other. Divide your forces and push through to victory. Fortune favours the bold on Bridges Assault.

With its enormous trench and tunnel systems, our Demolition Alley field is often the site of fierce paintball action.

This traditional attack-and-defend game is one of the players’ favourites.
The defensive squad assumes leadership of the supply depot and is tasked with protecting it.
Starting in the tunnels, the assaulting squad bursts out of one of three covered access points onto the field’s network of trenches.
Before time runs out, they must make it up Demolition Alley to detonate the detonators and blow up the supply dump.

This fascinating game is full of twists and mayhem, and it culminates in an explosive conclusion.

Along with woodsball and scenario paintball, speedball is one of three unique game varieties in the sport of skirmish paintball.

It’s a generic word for a game in which the playing field is made up of bunkers with the same number and placement on either side of the field, allowing each team to compete on an equal footing.
It was designed in this manner to provide a better platform for competitive paintball, both in terms of playing and watching games.

How to find us